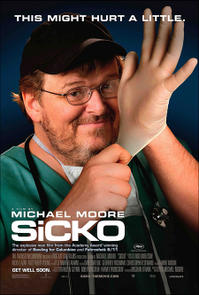 I went to see Michael Moore’s Sicko last night and it is truly worthy of being seen by every American. I say that knowing how many feel about Michael Moore and his tendency towards spectacle. I hope that people can set aside whatever prejudice they have towards Moore and see this movie.

This is a movie that contains more truth than any he has made so far. I went in with a skeptical mind, knowing the issues that face the practice of medicine in the United States in this new millennium, how easy they can be discussed inaccurately or flippantly and how medicine was once practiced in this country. Medicine is something deeply personal to me as I am a the son of two doctors – my mother a private-practice family physician who has been practicing for more than 30 years, and my father a research MD at the NIH. This movie struck many chords, as someone who has insurance, who studies medicine, who cares about fixing our current medical care system, who has known doctors, and who has received medical care. There is something for everyone in this movie, doctors, nurses, patient, and policy-makers alike, and I sincerely wish that everyone gives it a chance and an open mind. I doubt anyone will see it and be disappointed or unaffected.

Now, the rest will be below the fold, I’ll try to keep spoilers to a minimum, but I’ll need to discuss some scenes in order to describe the importance of this movie.

First let me give you my background so that you know my biases and understanding of the current medical problem.

My mother, who has long practiced as a general practitioner, hates insurance companies for what they have done to medicine. She has been in practice for decades, and when in the 90s HMOs and insurance companies began to dominate not just the financial side but the actual practice of medicine, she despaired. It has been heartbreaking to see someone who loved medicine and cares greatly about her patients’ welfare lose interest in practicing medicine as she’s had to hire extra employees to deal with the endless paperwork – not designed to clarify medical records but to create barriers to reimbursement. The not-so-secret policy of flat-out denying legitimate claims a set percentage of the time has set her teeth on edge, as she has to personally fight with insurance companies for reimbursement for procedures – like flu shots – which clearly the insurance companies feel doctors won’t fight over since it isn’t worth their time.

To see them second-guess her care of people, without knowing a damn thing about her patients’ health, is perhaps the worst insult of all. To tell a doctor what to do with her patients, as if they know something she doesn’t – quite the opposite. It is a system that is designed to demoralize doctors into being passive and unwilling to fight with insurance companies on behalf of their patients. Being as stubborn as all hell, she hasn’t stopped fighting with them, but the joy of practicing medicine has clearly gone.

My father, on the other hand, works for a socialized medical system – the public health service and the NIH. Patients in clinical trials get free care. No one second-guesses care. No one is looking over his shoulder to tell him what to do (at least in the clinic). Patients get care as part of his protocols, the NIH provides it, and that incessant demoralizing fight over pennies simply isn’t there. He will work as a physician until he dies at his desk, we’re pretty sure.

The most important thing to remember about this movie is that it is about people who have insurance. It is about those who have done the right thing, who have tried to protect themselves and their families and be responsible citizens, and the values of a country that allows them to be abused by hopelessly defective system.

Some of the most emotionally effective scenes came from the claims adjusters, medical officers and workers in the insurance industry who are clearly distraught by the damage the insurance industry does to good people who have paid good money and are still denied the care they deserve. In tears they describe how they have ruined lives to meet quotas, and denied care to people who suffered and even died as a results of their decisions. These are not bad people who work for the insurance companies, they are lodged in a system that seeks profit, that is all. And this is the root of the problem.

Moore shows many examples of how the insurance system, in the course of seeking higher profit, is designed to deny care rather than provide it. The evidence is sound, we all know this is a problem, it can not be denied. Those who are most to blame are the medical officers of these companies, who deny care to sound claims under their signature as doctors. Not only do they deserve to lose their licenses, but probably also deserve jail time for the reprehensible and negligent practice of medicine on people they do not know, who they have not seen, and whose charts they clearly never have reviewed. One possible solution – a stopgap at least – would to make medical officers subject to Boards of Physician Quality Assurance in the states in which the insurance companies operate. That way, they will be forced to be licensed in the individual states, and their will be state, medical and civilian oversight of their decisions. My mother actually tried to get just such a law passed in Maryland a decade ago – she really is pretty fiesty. Industry, finally playing the “I’ll Sail Away” card, managed to quash the legislation.

Moore is at his best when the movie is a true documentary. He points the camera at good people, who have done nothing to deserve the treatment they get, and the undeniable injustice of their treatment at the hands of insurance companies. The stunt of taking them to Cuba turned into the most emotionally poignant of the movie. These were firefighters and EMTs who were sick as a result of their efforts at the WTC after 9/11. The Cuban doctors treated them, without question, and these people in all sincerity were floored by the simple receipt of medical care. In a foreign country. In the third world. That is communist.

The movie had several flaws. The first, is the suggestion that it was solely the Republicans fault we don’t have universal health care as a result of Hillary Clinton’s efforts in the 90s. They deserve the lion’s share of the blame. However, Hillary also made two fatal mistakes of her own in the attempted implementation of the health care. First, she tried to construct the system behind closed doors, out of the eyes of the public. Second, she didn’t include any doctors, none, in the formation of her plan. Moore does show that now she is in their pocket, she’s given up fighting with them, instead she has joined them. She will not get my vote.

The second flaw was in the somewhat credulous coverage of the medical systems in other countries. These systems are superior to ours, don’t get me wrong. We pay more money per capita for medical care than any other country yet we receive the 2nd worst care in the industrialized world. There are states in this country that have infant mortality rates rivaling the third world. People, with and without insurance, suffer and die without medical interventions that would save their lives. I doubt anyone in Canada or Britain or France would trade their system for the American one in a million years. However, it will be a source of attacks on Moore and the film that will distract from the central message. Profit-motive must be removed from the distribution of medical care.

Expect a fair amount of the industry deck of cards to emerge as a result of this movie. Expect to hear “No problem”, and “consumer freedom”. Expect “Competition is magic” and “Jobs!”. Hell, expect the entire deck, especially the bogey-man cards of “Bureacrats” and “Unamerican/foreign” and “communist/socialist”. They will all be trotted out in turn. But there can be little doubt, our system sucks, and those of the other industrialized countries are far superior. The BS about rationing care and absence of technology are idiotic canards with no data to back them up. Don’t believe it.

As I am going into medicine and one day will treat patients, I’d like to say I’d rather be paid a half or even a quarter of what would be expected if I could practice medicine unimpeded by the incessant fight for reimbursement, and the constant second-guessing of medical care by insurance companies that only want to deny, deny, deny. Medical education in such a system would have to be free, this another point made by the movie, debt is used to chain people to unjust systems. As much as free-marketers talk about “choice” there is no choice in our current system. If you lose your job, you lose your insurance. If you fight with insurance companies and get dumped you lose your safety net. If you are poor you have no choice. If you have debt you have no choice. Who cares if I got paid less, at best I could again be proud of my profession, at the very least I’d know if I got sick, I wouldn’t be bankrupted myself.

When the doctors tell the 9/11 workers they would be happy to treat them I felt like that is the kind of medicine I want to practice. Treatment of patients, the correct care for the illness, the best care possible, without question, without consideration. The ability to do the right thing, all the time. Hopefully, I won’t have to move to Canada or Cuba to practice this type of medicine. But after this movie, I frankly have no stomach for American medicine.