The top official for consumer product safety has asked Congress in recent days to reject legislation that would strengthen the agency that polices thousands of consumer goods, from toys to tools.

On the eve of an important Senate committee meeting to consider the legislation, Nancy A. Nord, the acting chairman of the Consumer Product Safety Commission, has asked lawmakers in two letters not to approve the bulk of legislation that would increase the agency’s authority, double its budget and sharply increase its dwindling staff.

Ms. Nord opposes provisions that would increase the maximum penalties for safety violations and make it easier for the government to make public reports of faulty products, protect industry whistleblowers and prosecute executives of companies that willfully violate laws.

The measure is an effort to buttress an agency that has been under siege because of a raft of tainted and dangerous products manufactured both domestically and abroad. In the last two months alone, more than 13 million toys have been recalled after tests indicated lead levels of almost 200 times the safety ceiling.
…
Ms. Nord, who before joining the agency had been a lawyer at Eastman Kodak and an official at the United States Chamber of Commerce, criticized the measure in letters sent late last week and this afternoon to the Democratic leaders of the committee. She was critical, for instance, of a provision to ban lead from all toys. She said that the proposal to raise the potential penalty to $100 million “may have the undesired consequence of firms, as a precautionary measure, flooding the agency with virtually every consumer complaint and incident.”

Now, match this news with the latest news on Halloween plastic teeth.

Based on the inquiries by CBS News and the complaint filed with the Consumer Product Safety Commission, there is now an official investigation into why some “Ugly Teeth” have levels of lead 100 times beyond the legal limit.

There are thousands of these fake teeth, which have been purchased in the past few days as part of the ghoulish outfits of tiny trick-or-treaters around the country. Lead is dangerous if ingested, and extremely dangerous to small children.

The proportion of products that Professor Jeff Weidenhamer found to have high lead levels is what troubled him. Out of 56 Halloween-related products he tested, he found six to have levels between four and 130 times what is allowable. All 6 of the products with these problems were made in China.

I love the irony. 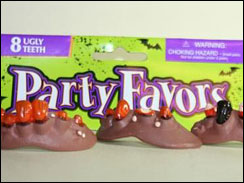 The teeth are supposed to make you look stupid. The irony is, with all the lead in them, they may actually make you stupid.

How fortunate we are that we have yet another incompetent or downright crooked Bush appointee in place to ensure that our critical regulatory agencies don’t do their jobs.