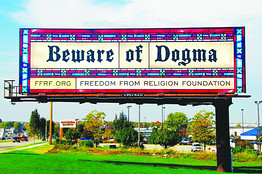 I never thought I’d see this. But here it is in all its glory. When I used to live in Georgia and drive past huge billboards that read “I heard that! — God,” or “You’re Welcome –God,” I imagined the day when atheist billboards would appear. I always wanted to buy a billboard that simply read, “God is Dead.” in part, to see whether Clear Channel would put it up, and in part, to hear the standard rejoinder said in Georgia–“Nietzsche is dead!” How profound!

Today’s Journal covers atheists’ efforts in reaching out, and concludes with this astute observation:

Still, leading activists say nonbelievers tend to be just as wary of organized atheism as they are of organized religion — making it tough to pull together a cohesive movement.

“A pastor can say to his flock, ‘All rise,’ and everyone rises. But try that in an atheist meeting,” said Marvin Straus, co-founder of an atheist group in Boulder, Colo. “A third of the people will rise. A third will tell you to go to hell. And a third will start arguing….That’s why it’s hard to say where we’re going as a movement.”